Finally, after all the hype had died down, I was reminded that I had been trying to get a table at The Harwood Arms. Ms L and I had tried so many times, but finally managed to get a table for a Sunday night. 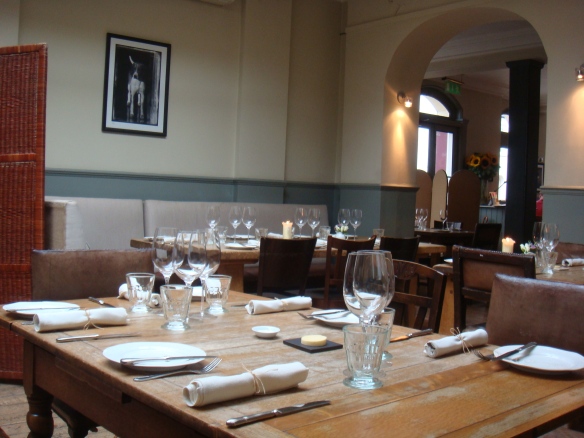 It was very quite when Ms L and I arrived at 730pm, it didn’t last long. Refurbished in September 2008, the pubs interior is of simple decor, mismatched chairs and coarse linen napkins tied with raffia. I liked it.  Although we were the only the second seated table, the other table having already ordered, we seemed to wait quite a while to be served. I know you need to give people a chance to peruse a menu but I’m impatient once I have decided. I was also ravenous after being out late the night before. Their absolutely delicious soda bread kept me at bay. 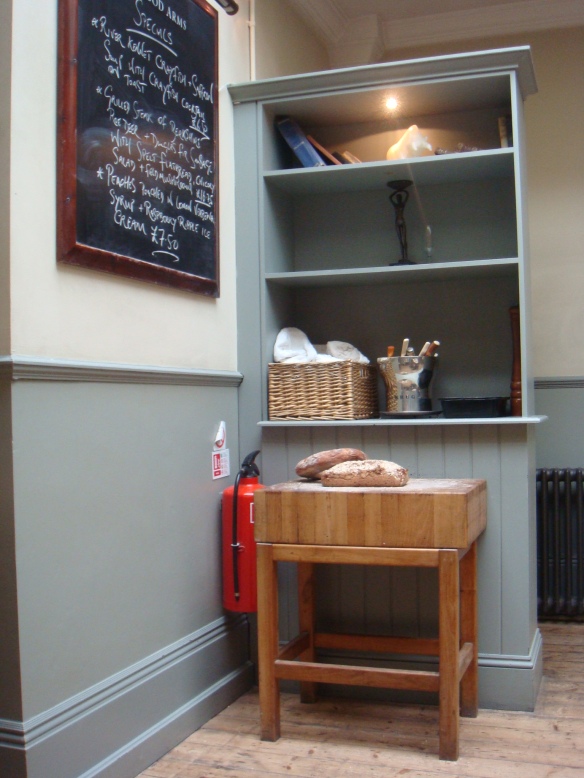 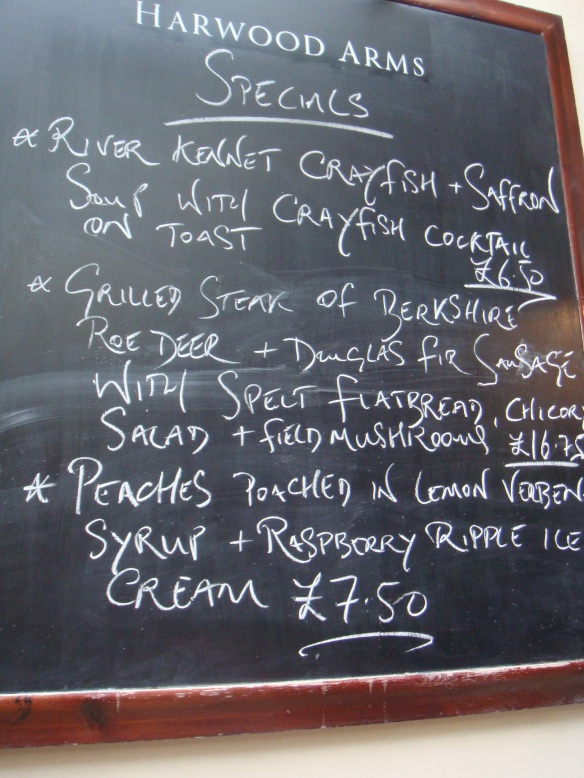 A lovely bottle of red was recommended to us and we were settling into Sunday night. A soft French Pinot Noir, was a good overall choice for the dishes we had chosen. 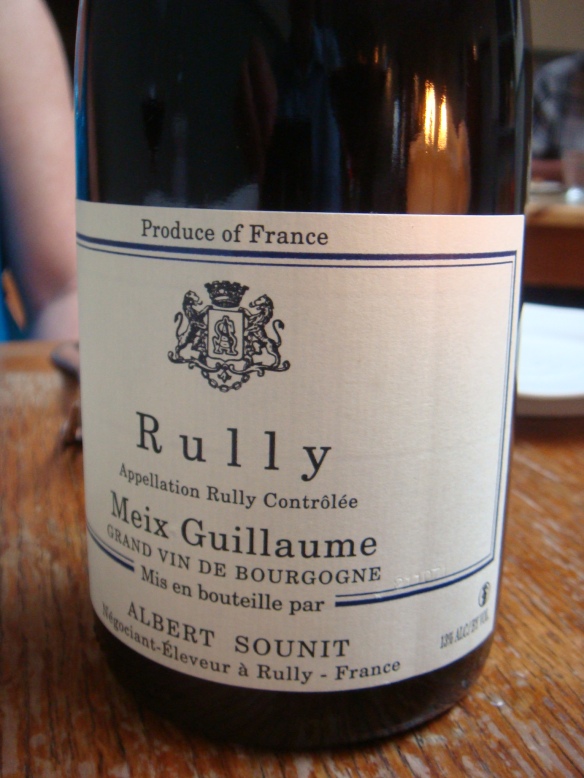 I chose the Kennet River Crayfish and saffron soup with crayfish cocktail toast from the specials board. Sounded good to me, but it was a disappointment. 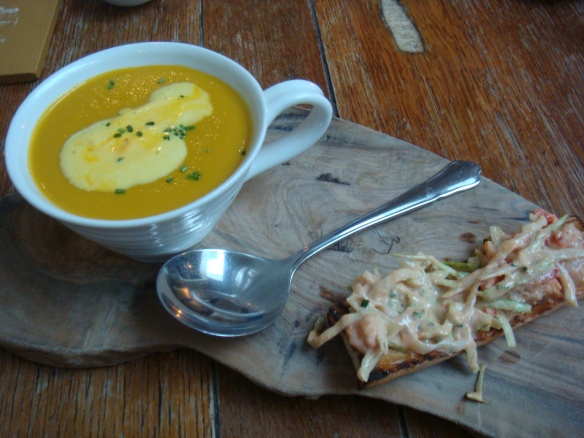 On first sight, it looked good and I liked the presentation on the rustic timber board. The soup was lovely but the crayfish cocktail toast tasted like bad coleslaw. It spoilt the whole dish for me. 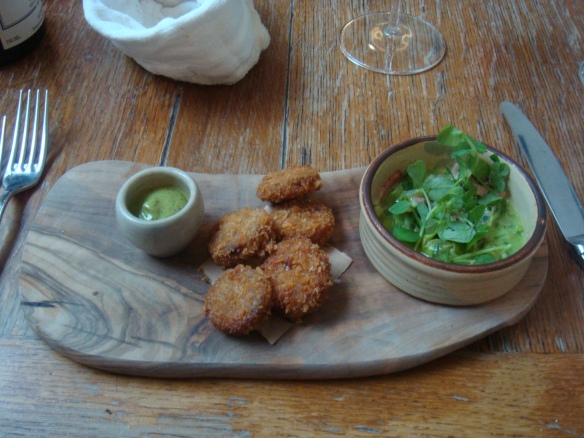 Ms L chose the Crisp brawn with tarragon mustard and broad beans stewed with smoked bacon and gem lettuce. The colours of the crispy fried brawn against the bright green of the tarragon mustard and broad bean stew, brought comfort to my eyes. Judging from the noises coming from the other side of the table it was good… nom, nom, nom. Crisp brawn, fantastic. 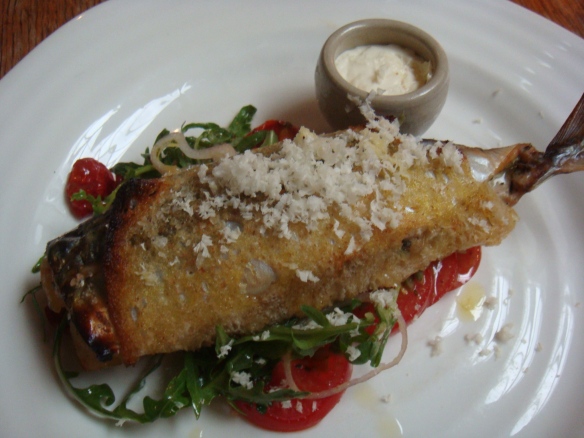 The main, whole butterflied and stuffed mackerel with a sour dough crust, Isle of Wight tomatoes, wild rocket and horseradish, was also a bit disappointing. The fish was well cooked but the sough dough crust didn’t bring anything to the dish and the stuffing….what stuffing???A few herbs maybe, for £14.50. 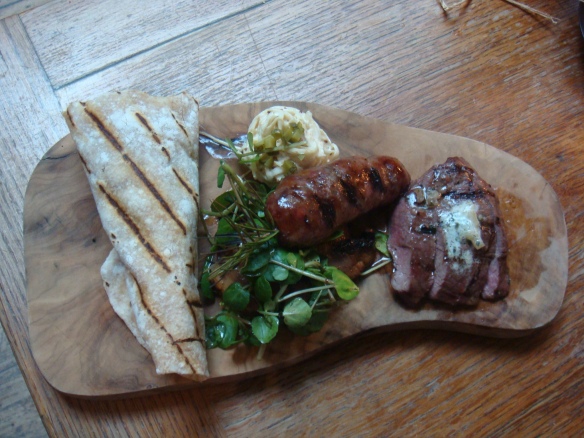 Ms L chose off the specials board, the grilled steak of Bershire Roe deer and Douglas Fir sausage. A dish of tender meat she enjoyed but it was served on a timber board with a dinner plate for you to transfer the dish onto, so that you could manage to eat it without it all falling off the board. A smallish portion for £16.75, I thought. 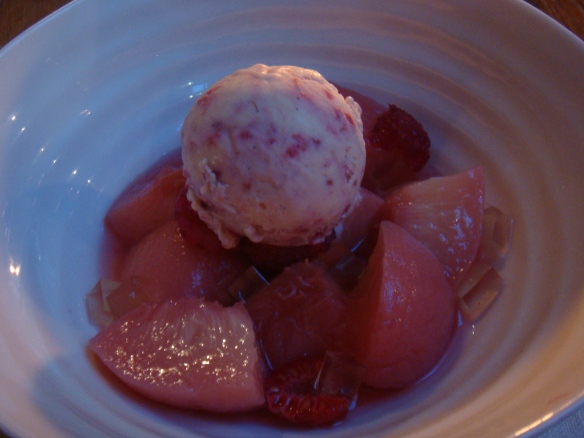 If I didn’t know this place had rave reviews and had recently been the first pub in London to be awarded a Michelin star, I would have thought it was pretty good pub grub. Unfortuntately I did come knowing all this, so I expected something worthy of  all the praise. It’s great that they source alot of produce from small British suppliers, but that’s not unique anymore. I actually think it’s expected now, more and more, especially if they have been granted a star.

It was good, I’m glad I went, and even though I live relatively close, I think I will stick to my local pub which serves good reasonably priced food. I can walk in and always find a table. It’s still a pub for the locals.

On a rare balmy night in London…. 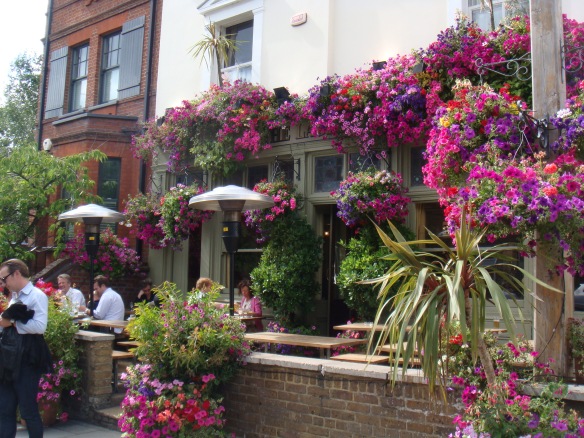 ….. I was catching up with a friend. She had cycled past a pub that caught her eye and we thought we would give it a try. We were very pleasantly surprised. The usual “why haven’t we been here before” rang true in our heads! But that’s London, you never know what gems you might find around the next corner.

Wanting to have a girlie catch up and not impose the obligatory food photography, I opted to leave the camera in the handbag. By the end of the meal I knew I had to come back to gather the evidence for you all (not because I wanted to eat there again at all)! 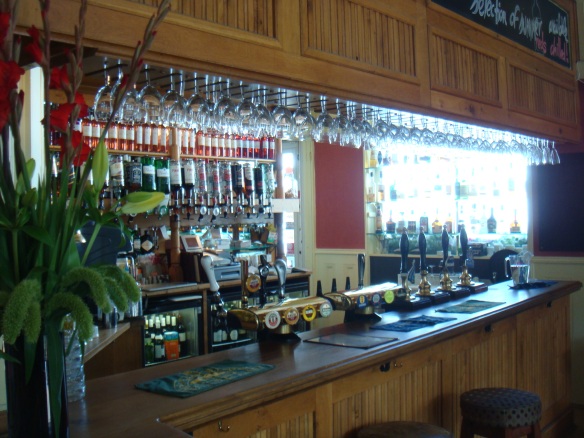 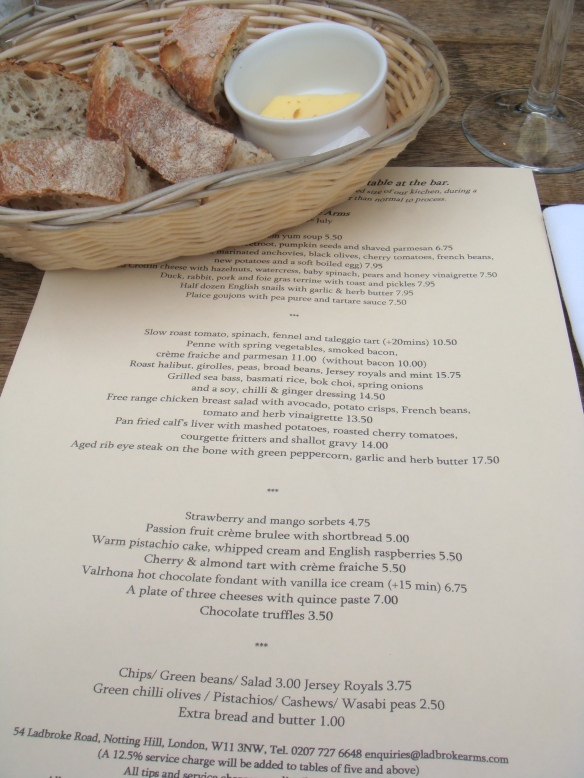 I was a little disappointed the Scottish Langoustines with aioli had left the menu from last week, but I guess that shows they try to buy good fresh produce for a decent price (smart pub management, I say). 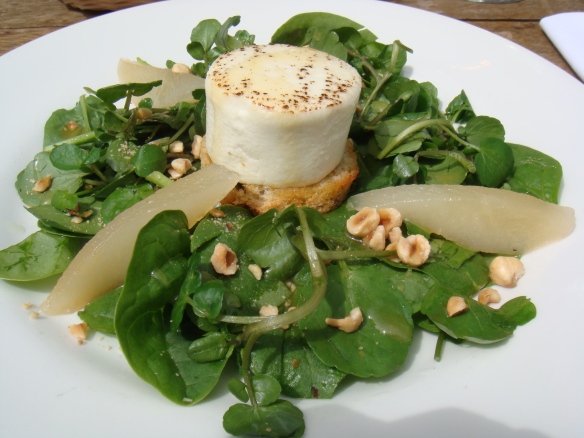 The suggestion, for a light starter, from the waiter, was the Baked Crottin with hazelnuts, watercress, baby spinach, pears and honey vinaigrette. I thought it looked inviting and it tasted quite delicious. I would have liked the vinaigrette to have more bite though, a bit more sherry or cabernet vinager would have done the trick nicely. But I’m not complaining, it was not too overdressed and the cheese was delicate. 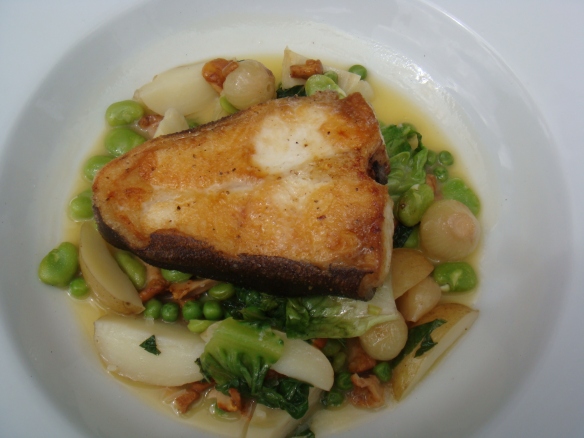 Roast Halibut, girolles, peas, broad beans, Jersey royals and mint. The halibut was beautifully cooked and the cutlet style portions are perfect for relaxed pub fare. I have to say though must have been a reasonably small halibut. Delicious and meaty none the less, with the surprise of a few artichokes in the vegetable accompaniments. 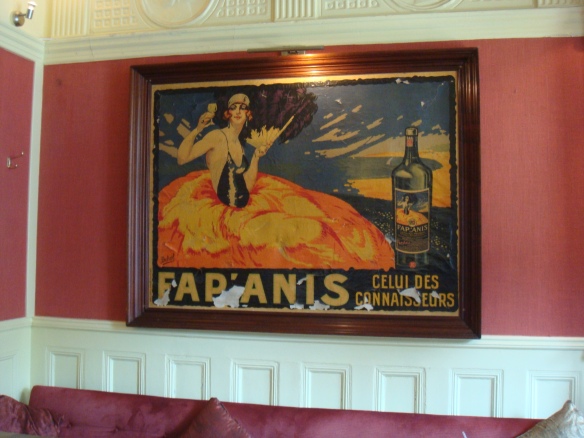 It had started to rain lightly so I headed inside. The staff didn’t seem to worry and promptly found where I had huddled away. Dessert?? feeling full I opted for the strawberry and mango sorbets. 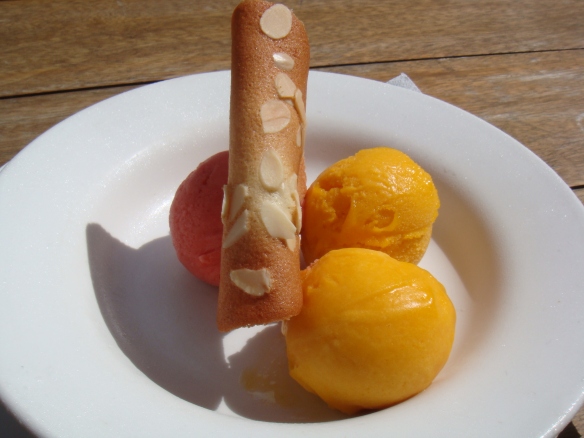 A perfect end to the meal on a humid summers day. The mango sorbet was certainly the winner for me and I enjoyed the simple almond tuile.

This pub was a great find! The wine list is simple, but good, with a variety of regions, old and new. You need to leave your card behind the bar to order food and are warned on the menu that there may be a wait due to the small kitchen. I didn’t find either a problem. My first visit was on a very busy Saturday night and the next for a quite Friday lunch. I thought the wait for food on each occasion quite reasonable. As you can imagine it is popular with the locals! Like Me!!! 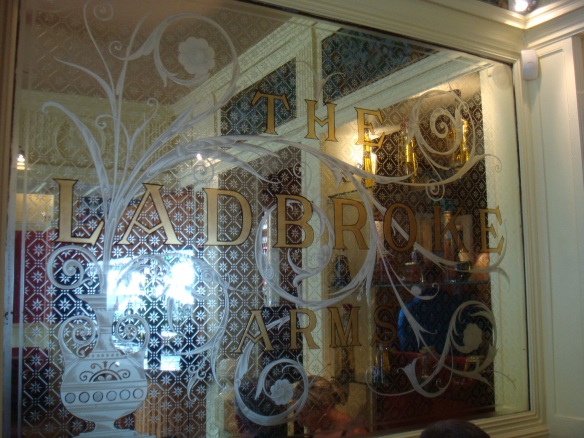