Ronda is a stunning village. Perched high in the Andalucian mountains, Southern Spain, it has a proud bullfighting history. The story is that it is here, legendary bullfighter, Pedro Romero, founded the style of bullfighting where the matadore stands on the ground to face the bull, and not on horseback, as it had been.

I travelled there from Gibraltar on the train line that was built by British garrison officers stationed there in the 1890s who wanted to escape the busy port of Gibraltar. The train wasn’t fast by any means, and from memory it took over 2 hrs to get to Ronda, but the scenery it passes is so stunning it’s worth it.

A deep gorge divides the old city from the new. You could stand on the Puente Nuevo bridge, which joins the two, for hours taking in the breathtaking view and trying to imaging life in times gone by. Due to the cliffs and gorges the city was one of the last Moorish cities to fall during the Reconquest of Spain by the Catholics.

During one of Jamie Oliver’s trips around Europe he visited Ronda too. He chose to make their gazpacho, pimping it up by grilling the onion for more flavour and adding almonds and orange. I’m sure it tasted great but I’m not sure the Andalucians would approve.

There are many different recipes for Gazpacho and it’s another one of those dishes everyone thinks their version is the correct one. Mine is a simple gazpacho, made from simple ingredients. 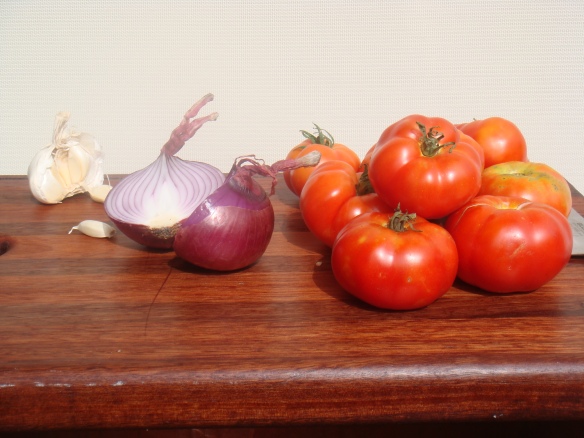 Always only made and eaten in the heat of summer when tomatoes are in season and full of flavour. This soup is served cool as a refreshing start to any meal.

salt and pepper to taste

Soak bread in water (about 250-300mls) enough to just cover the bread. Leave to soak for 5-10 minutes until bread has soaked up water.

This is a rustic gazpacho and if you prefer it smoother you can rub it through a fine sieve.

Serve cool in a glass with finely chopped red capsicum and cucumber on the side. Depending on your tomatoes this makes 1.5-2L of gazpacho. Easily enough for 10-12 people as an amuse bouche or starter. 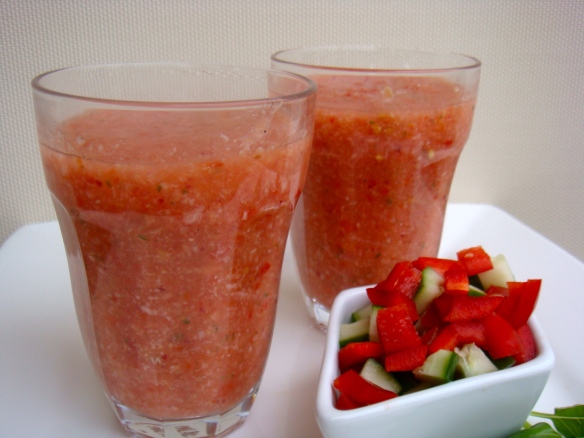